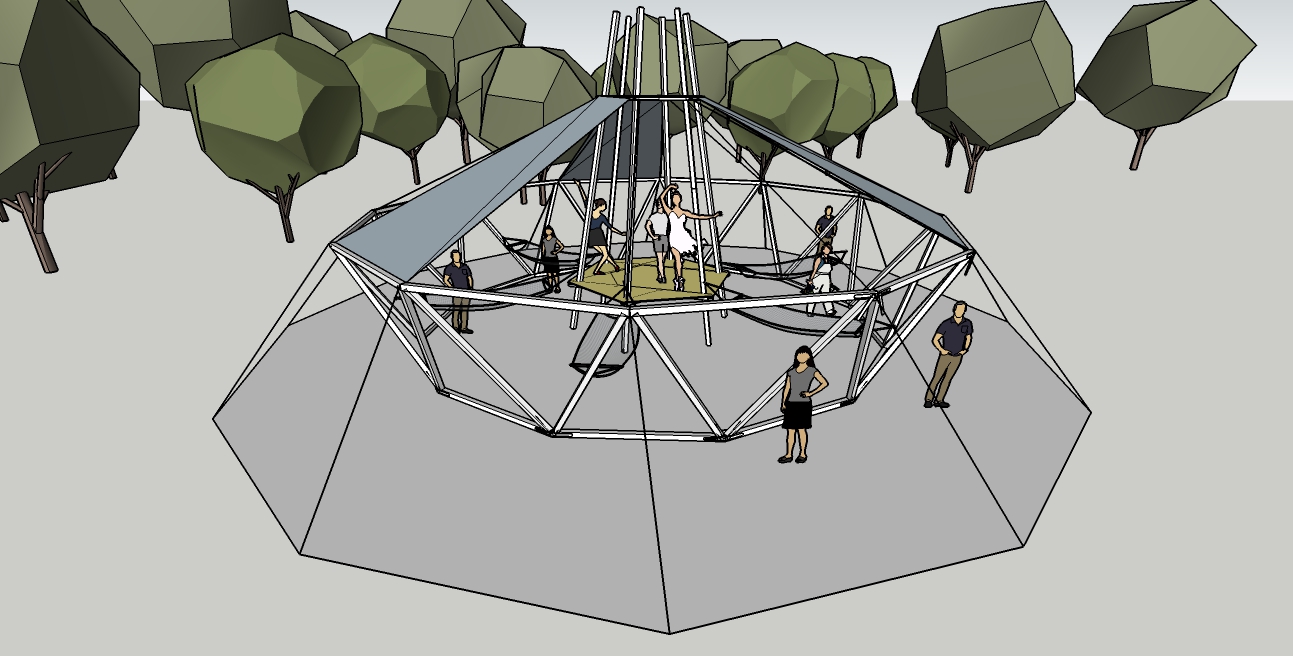 Hammock Reactor is simultaneously a performance space and chillout zone! Bring your hammock and hang out while some good music is playing, or watch someone perform on the center-stage, or perform yourself.

This was our dream for The Borderland 2017 and we got funded and built it and did it!

Full description of concept
How can we provide a chillout space for a maximum of hammocks with a minimum of material? In 2017, we are building a new art/camp/stage to solve this riddle: the “Hammock Reactor”. It consist of two parts: an outer upper rim in about 2.5 meter height with about 12m diameter. An inner 6-meter high tower with a 4-meter diameter stage. 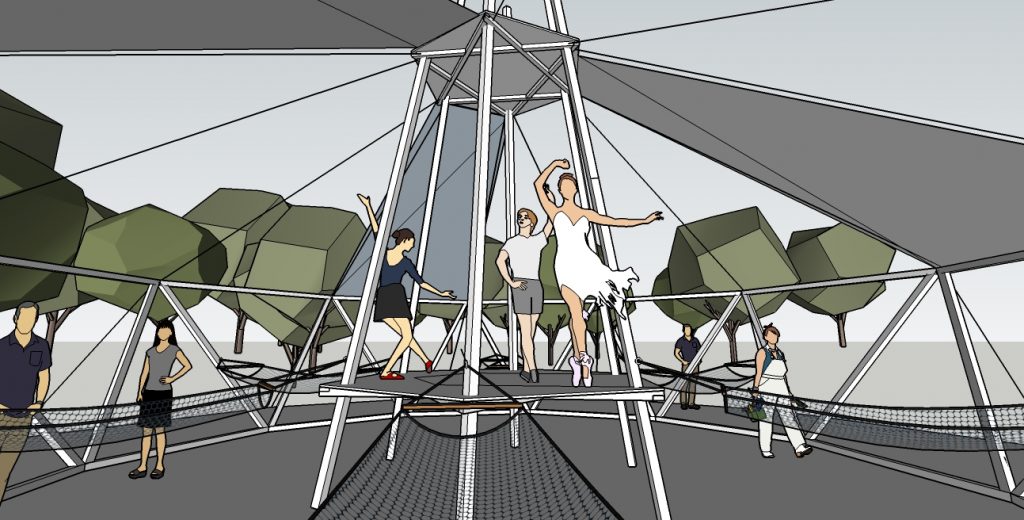 Borderlings will be able to hang up to 24 hammocks between the outer ring and the inner tower. You will have a length of about 4 meters for your hammock, you will directly view the center stage from your hammock. The hammocks will point from the center to outside.

Borderlings will be able to perform on the stage in the center of the tower. There will be designated times for performing. When not used as stage in the afternoons, the construction is re-purposed as table and will be transformed into a bar. The multi-use design saves materials, resources, space, building effort, and transport cost.

The stage will have 4-meter diameter, lightning on top, and a sound system. Artists will be able to bring their own music for their performance. The stage will also feature a sturdy hookup point 3.5m above the stage which can be used for aerial art.

The experience of performing on this stage will be unique: you are surrounded 360 degrees with your audience. The audience will hang out by hanging their hammocks into the open space.

Tarps will be strung between the inner tower and the outer rim to provide sun and rain protection. The top of the tower will be off limits for Borderlings for safety reasons.

An epic light installation is planned to illuminate the “Hammock Reactor” at night.

Salon Leobard – the “Tickling Zoo for the Artist Within” – is a participatory creative Salon coming together Saturdays every few weeks in Vienna.

To be able to build the metal connectors for the Hammock Reactor in January 2017, we had to expand our skills, get out of our comfort zone, and learn welding and metalworks. We are rewarded with manyfold results: growing art, growing our skills, being part of a vibrant Burning Man community in Austria and Europe. Give us a hug when you meet us!

Planning for the Hammock Reactor installation at Borderland started in August 2016, after we came back from our local Burn “Spark” 2016 in Austria. We began designing and testing the materials in November 2016. We built the outer ring of the camp in a 1:3 scale model as art installation for the Vienna Burning Ball, which was on 4th of February. Part of the material used at the Vienna Burning Ball will be reused for Borderland to save costs and foster re-use between multiple burns/decoms. We discussed the structural integrity with an architect and a master carpenter, buddies of us. Plans are 80% finished, building started. April – June 2017 is building time.

To transport the art from Vienna/Austria to Boesdal, we designed the structure to be easily transportable. Inherent in the design, an intelligent buildup/teardown process was included that lets us use the inner mechanics of the structure to twist/raise both the tower and the outer rim of the Reactor without the need for ladders or scaffolding, reducing our transport and carbon footprint.

For material we need around 70 wood beams of 8x8x300cm dimension, 14 of 12x12x300cm dimension, wooden plates, about 300 screws, nuts, washers, screws, 6m of structural steel L-profiles, steel cable, earth anchors/lagbolts, tarps. To foster a sustainable use of material and creative energy, we will build the Hammock Reactor so that it can be built up and be transported repeatedly for multiple burns. We plan to evolve this art over the coming years, to further decorate / expand the structure, allow the tower to be climbed, allow a higher aerial art stage, etc. For the first time of doing this, we intentionally limited some parts of the design for safety reasons. We designated the top of the structure “off limits” and limited the dimensions of the aerial stage.

The Hammock Reactor art piece is 100% deconstructable and reusable. The camp has a MOOP plan and an LNT team.

Do you need electricity from the grid?

We need up to 400W for Musik if on full Blast. But we are a relaxed camp so at most it will be only a fraction of that.

There are Slide Projectors which will use from 60W to 160W max. if all active the same time.

Up to 315W for a full HD Beamer for psychedelic projections on random times at night.

The current drain for the planned epic multimedia light installation is unknown jet, but it is just several LED-stripes and its control unit.

General lighting at the camp for safety reasons during sessions at night will be between 100W to 200W.

If we cannot get enough power from the grid we plan to get some from the bus and the caravan. In that case we have to recharge their batteries at daytime when less power is needed. The chargers draw 300W together at max. for limited time.

Other equipment like notebooks, headsets and similar stuff will be charged at daytime. We expect up to 200W for limited time.

One night is planned for serious partying. This night presumable everything will be active the same time. This all adds up to 1300W max. In case we cannot get enough power from the grid we plan to use a noise-damped generator for parts of our electrical needs. Even with subdued music it should be inaudible when placed between camper and barn. If another generator is running in the proximity it definite is.

Will there be light?

We want to have nice visual effects on our Hammock Reactor. Our current idea is to use LED stripes to illuminate the wooden struts of the Reactor. Depending on the DJ or stage performance, the LED animations may either be random effects or be synchronized to the music played. Projection mappings might be possible if we are be able to provide projectors and have enough power. Also, we have some LED projectors for slides to project still images.

What is your audio footprint?

However, we plan to throw a party playing electronic house music on one day 8pm-11pm, where things might get louder.

We designed the Hammock Reactor to withstand both forces. To ensure safety against the wind, we seeked placement in the lower area of Boesdal. When the wind raises to a fresh breeze (30km/h), we plan to take down the tarps and tie them around the center tower to protect the equipment in the tower. Steel Cables tied into the ground will hold the overall structure sturdy. Steel cables also connect the tower and the ring. Both the tower and the outer ring are structurally sturdy themselves and can stand on their own. The steel cable is our insurance for everything Boesdal will throw at us.

Safety:
The outer rim and inner tower are built out of wood and metal. The structure will be tied down with a combination of steel cable, earth anchors and screws. A metal rod going across the top of the tower is planned which will be connected with the steel cables to form a faraday cage to protect against lightning.

The tarps used as sun/rain protection are planned to be tied onto the inner tower in the case of storms.

The top of the tower will have an observation deck at 4.5 meter height for a max of 2-4 people at the same time. To enforce the max load possible, the deck will be strictly off limits for Borderlings but only allowed to be used by our own camp members. Appropriate signage is planned to keep Borderlings off the top of the tower. In addition, the stairs leading to this upper deck are planned to be removed when needed to enforce this safety measure by physically blocking the access.

How can other Borderlings co-create with you?

Bring your hammock and hang out in the Reactor with us. Bring acoustic instruments and join our jam sessions. Get in touch with us to perform on our stage. Join us for buildup and teardown, where we need many hands. Fund our dream.